The task of compiling the following list of 12 famous Welsh artists had me flummoxed for many an evening. Deciding which artists to include and which to omit was no easy task. Why not include for example Thomas Barker, Edward Owen, Sir Cedric Morris, Nick Evans, Jim Burns or Robert Thomas? All the while I was conscious of there being so much great artistic talent in Welsh art history, not even to mention the gamut of great Welsh contemporary artists. I did not want to forget anybody, but I needed to select just twelve and it was not easy.

As an aside, please do not expect typical biographies in this review. Although I have put some basic biographical data here, my aim was to focus more on information that could be fascinating, attract attention, mirthful or even unconventional from the point of view of art lovers, aspiring artists or professionals. 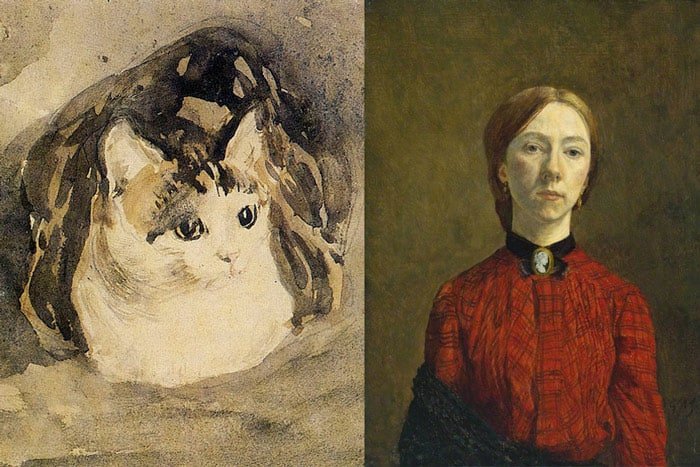 This outstanding painter born in Haverfordwest seemed to artistically live in the shadow of her famous brother Augustus John. However, she developed her own original style of painting, studying in the Slade School of Art and painted many stunning portraits. Gwen lost her mother when she was only 8 years old. After this her family relocated to picturesque Tenby – a place so loved by artists. At the beginning Gwen was taught by a governess. In 1903 she moved to France, where she lived and professionally worked. She called herself “God’s Little Painter”, reiterated by August Rodin1. Branching out from her portraits, she also loved to paint her cat (see below) and flowers. Her famous paintings include:

Augustus was the younger brother of Gwen John. He was not only a Welsh painter, but also the most talented draughtsman of his generation and etcher. He is famous first of all because of his figure drawings and portraits, as well as his new technique of oil sketching. He studied at the Tenby School of Art and then the Slade School of Art in London. Augustus was invited to paint the Queen in 1937. He suggested that he stay at a pub near Windsor Castle. He thought this pub would be a good place for him and the Queen to have secret sittings, but as one can imagine the Queen quickly rejected the idea2. He was fascinated by Gypsies, travelled in a caravan and was the President of the Gypsy Love Society. During his adventurous life he was: a bohemian, a war artist during Word War I, a pacifist (the Peace Pledge Union), a leader of the New English Art Club, an associate of the Royal Academy, a trustee of the Tate Gallery, president of the Royal Society of Portrait Painters and winner of the Order of Merit. Augustus was connected to his sister Gwen strongly and lived in Paris, too3. Here are some examples of his pieces of art:

This well-known Welsh landscape painter and printmaker suffered from depression and epilepsy and because of the latter he failed a British Army’s medical examination. Thanks to that doctor’s prognosis and his advice to choose art instead, Kyffin become an artist. He decided to study at London’s Slade School of Fine Art and later was a master of art at Highgate School in London. He was a winner of Winston Churchill Fellowship’s scholarship for studying & painting in Welsh Patagonia, president of the Royal Cambrian Academy5(under his presidency this academy was re-housed and revitalized.9) and supporter of local Welsh galleries and charities – donator of his own paintings6, 7. Moreover, he encouraged young artists and guided them.

His main subjects were the Welsh landscape, sheep farmers, Snowdonia8, Anglesey, and liked to include waterfalls and majestic nature9. He died of lung cancer, which has been attributed to the fact that he used lead-based paints. A number of critics accused him of using too much black in his works; Kyffin responded, “that was how he saw things”10. He said also, “I was lucky that I was born into a landscape so beautiful I had no need to go elsewhere. There was never any question of what I should paint.”8 Examples of paintings include:

As an interlude we highly recommend the following book if you want to delve more into the art history of Wales and learn more about the artists featured here. It is a wonderful read and includes over 400 images of paintings, prints and sculptures.

The Tradition: A New History of Welsh Art by Peter Lord

Thomas Jones was a painter of Italian (Rome and Naples) and Welsh landscapes, child of a land owner and he had 15 siblings. His uncle wanted him to be a priest and funded his university studies, but soon after the death of this uncle, Thomas left that education. He relocated from Oxford to London, enrolled at William Shipley’s drawing school and started to fulfill his real dream of life. He was a pupil of the famous Welsh artist Richard Wilson (see below) and member of the Incorporated Society of Artists11. Examples of his paintings include:

Richard Wilson was a Welsh romantic landscape painter, known as the ‘father of English landscape’13 and influenced by Claude and Poussin2. His father, a clergyman, encouraged him to paint and taught him a fine classical education14. He studied and worked in Italy. Initially he painted mainly portraits. He was one of the founders & members of the Royal Academy. Examples of his paintings include:

Shani Rhys Jones was born in Melbourne (Australia) as the daughter of a Welsh father and Australian mother. She moved to the United Kingdom as a child. Studied at Loughborough College Art and Design and obtained a degree in Fine Art at Saint Martin’s School of Art in London. This artist is known in particular for her self-portraits. Shani Rhys was elected to the Royal Cambrian academy of Art and was a member of the Order of the British Empire for services to art. In addition she was awarded: BBC Wales Visual Artist of the Year 1994 title, Aberystwyth Open winner, the Mostyn Open, The Gold Medal at the National Eisteddfod, the Hunting Observer Art Prize and second prize at the BP National Portrait Award15. Examples of her paintings include:

Ernest Zobole was a Welsh painter, art teacher and son of Italian immigrants. He attended Porth Grammar School and then the Cardiff College of Art. He then served the British Army in Palestine and Egypt. On return, Zobole married his love from childhood, taught in Llangefni in Anglesey and in a religious Welsh school in Aberdare. Later he was a teacher in Rhondda at Treorchy County Secondary School and a prestigious painting lecturer at Newport Art School. He was a member of the Rhondda Group, 56 Group Wales, as well as Honorary Fellow of the University of Wales, Swansea. He presented his own style in painting.

Zobole’s “paintings give up their secrets gradually, with their fractured and unnatural perspectives, unexpected juxtapositions and motifs. Terrace streets are flattened into fossil traces, people may be tiny figures or gigantic silhouettes.”25 Examples of his works include:

Ceryth Wyn Evans is a modern Welsh conceptual artist, sculptor and a film, photography and installations maker. He was educated at Ysgol Dewi Sant Llanelli Boys Grammar School, Dyfed College of Art (foundation course) and Saint Martin’s School of Art & the Royal College of Art(studies). He taught at the Architectural Association in London. He explores “the relationship between language and space, temporality and the phenomenology of perception[…]”17. Cerith Wyn uses eccentric materials and means, such as: fireworks, neon lights, lanterns, Morse code, plants, mirror balls and even urine! He shows his interest in film history and literature in art18. Examples of his works include:

Bedyr Williams lives and works near Caernarfon in Wales. His art combines installation, photography, video, writing, drawings, sculptures, performance and stand-up comedy. He studied at Saint Martin’s School of Art and Ateliers in Arnhem. He is has won the Paul Hamlyn Award for the Visual Arts, the Gold Medal for Fine Art at the National Eisteddfod of Wales for his mixed media sculptures and artworks, as well as Arts Council of Wales, Creative Wales Award. This artist explores “the friction between the deadly serious & the banal aspects of modern life”20, “mankind’s significance in the universe” and dystopia21. He is influenced by Dylan Thomas, presents his own original sense of humour and “sharp critique of our everyday world”22. Examples of his pieces of art include: 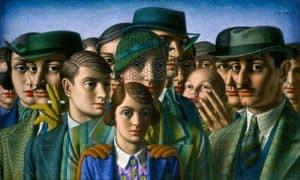 Alfred Janes is famous mainly thanks to his still life paintings and portraits. He was born over a fruit and flower shop owned by his parents in Swansea’s Castle Square23, and this background seems to be visible in his sensitiveness for still life details. He attended Bishop Gore School, the Swansea School of Art and Crafts and Royal Academy of Arts in London. At the age of 16 he exhibited. Member of The Kardomah Gang (together with Dylan Thomas), teacher at the Swansea School of Art and Crafts and Croydon College of Art. He worked out his own style: outlining depicted objects with a penknife and making polygonal grids before finally painting. Examples of his paintings include 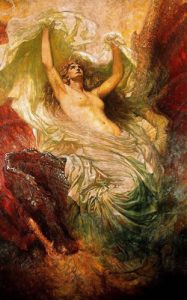 His father wanted him to be a doctor, but Christopher dreamt to be an artist. A visit to the Walker Art Gallery in Liverpool and a view of “Perseus and Andromeda” by Frederick Leighton enchanted him so much, that he decided to start on an artistic path. He studied in the beginning in Neath at the Town’s Technical Institute and then at the Royal College of Art and the Royal Academy School. His portrait of Sir Alfred Lyall was exhibited at the Royal Academy, and after this event, Christopher was invited to join the Royal Society of British Artists’ ranks. He exhibited with the Academy many paintings. King George V offered him a commission to paint the Investiture of Edward, Prince of Wales. Christopher visited Buckingham Palace in order to make a complete picture of the Royal Family. Examples of his paintings include:

Gwilym Pritchard was a Welsh landscape painter born in Llanystumdwy – a small village in North Wales. He studied at Bangor Normal College and Birmingham College of Art. He taught in Anglesey, was a member of the Royal Cambrian Academy, winner of the Silver Medal by the Societe Academique des Arts – Sciences – Lettres de Paris and Honorary Fellow of the University of Wales. He stated that, “Love and Art hit me at about the same time”24. Claudie Williams – also an artist and his wife was Gwilym’s greatest motivation for art. Gwilym had four children and on one occasion he nearly burned down the school, where he was working as a teacher of ceramics, because he was so anxious about becoming a father he left the kiln on all night. He knew Ernest Zobole and was a good friend with Kyffin Williams. During a later period with his wife they owned a studio and gave art lessons. They were on the move nearly all their lives. He said: “My paintings are straightforward statements of my reaction to my environment.”24 , “I want to be a past of what I am painting”, “as to whether I am Welsh or not, it is a highly self-conscious question which I have never felt the need to ask myself. I am. It is enough and the rest is propaganda.”24 The couple’s eldest son – Ceri – was an artist, also. Examples of his paintings include:

As a footnote you are more than welcome to browse our very own affordable Welsh art for sale.