When you think of cuisines of the world, Welsh cuisine probably isn’t on your list. But that’s something you should seek to rectify immediately, for famous Welsh food is an impeccable history lesson that you can taste.

Famous Welsh food did garner some culinary practices from the neighbouring English, however, the Welsh lived and worked in isolation, producing their foods from limited ingredients that they could produce. Raising sheep became a major practice in Wales as did cattle, and thus, some of the most famous Welsh food centres around it. However, it’s not all meat. In fact, there are some vegetarian delights, as well as ingredients from the sea, thanks to a strong fishing culture too. that are bound to bring you back again and again to try famous Welsh food.

There are recipes for Welsh Cawl that go back to the 14th century. This is why it’s often called the national dish of Wales. This warm and comforting soup has always been eaten during the winter months. Usually, you’ll find this famous Welsh food which eats like a stew, filled with Welsh lamb (more on that below), leeks, and potatoes, though everyone seems to have their own recipe for this dish.

That’s why tasting it in every place is an ideal way to get a feel for Welsh Cawl. Historically, salted bacon or beef with carrots and seasonal vegetables was used. When potatoes were brought to Europe in the later portion of the 16th century, they became a staple ingredient that has remained to this day.

To make it even more delightful to enjoy, the Welsh serve this famous Welsh food with a good rustic bread and a big hunk of cheese.

Do you enjoy indulging in caviar? If so, you’ll love this famous Welsh food. Welsh Laverbread, called ‘bara lawr’ actually has no bread in it at all. It’s a puree of laver which is a very delicious type of edible seaweed. Not only is it delicious, but it’s also highly nutritious. For fun it has been called the Welsh caviar!

To the untrained eye, it does appear a little slimy in texture. But this delightful plant-based option is something any traveller to Wales can partake in with great pleasure. It’s very savoury with that umami flavour and is often enjoyed upon wedges of golden toast or served with seafood dishes (another thing Welsh cuisine has going for it).

If you really want to get into Welsh lifestyle, wake up and enjoy a Welsh miner’s traditional breakfast which includes bacon and eggs, and a nice serving of laverbread.

If you’re heard of any Welsh cuisine before at all, perhaps the name ‘Welsh Rarebit’ strikes some glimmer of recognition. It’s a dish that can be traced back to the 18th century, however recipes are said to be quite a bit older than that. Fun fact: Welsh Rarebit was once called ‘Welsh Rabbit.’ It doesn’t contain any rabbit in it either, good to know for anyone that adores cuddly bunnies. 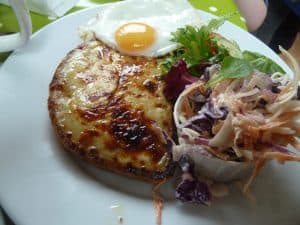 Welsh Rarebit is said to have hailed from the valleys of South Wales, incorporating a nice hunk of Welsh cheese that’s added to a mix of beaten eggs and milk and then seasoned. It’s baked until the mixture firms up and the cheese is nice and melted. Did we have you at cheese? Yes, Welsh Rarebit is a famous Welsh food that all cheese lovers will fall head over heels for.

Sometimes, you may hear it called ‘posh cheese on toast.’ Whatever you want to call it, you will certainly adore it. There are newer variations with ale, Worcestershire sauce, or mustard being added to the seasonings. Clever as these are (delicious too!) the star has always been the cheese and that is the one thing you won’t see change in any recipe. The cheese used in Welsh Rarebit MUST be top quality.

Incidentally, you may also see it topped with a fried egg. If you’re perusing menus while in Wales and see ‘Buck Rarebit,’ that’s how you’ll find it. Add a tomato and you get a ‘Blushing Bunny.’

Often, Welsh Cakes are mistaken for scones, but that’s simply not the case. However, it stands to reason that if you’ve had a traditional scone, you’re going to love this famous Welsh food. 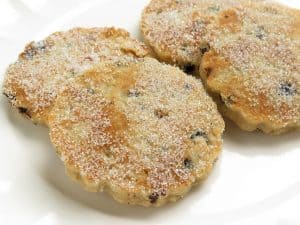 As per tradition, these are made with flour, butter, eggs, milk, and currants. They’ve been served since the 19th century and while traditional varieties prevail, you’ll also find them in new and innovative flavours. Expect to see them in chocolate and lemon and other unique ways, though make sure you taste a traditional one first.

Welsh Cakes are served hot or cold, usually dusted with a bit of sugar to offset the flavour. Unlike cakes of other styles, Welsh Cakes are cooked on a griddle instead of baked in the oven.

In Welsh, the name ‘Bara Brith’ translates to ‘speckled bread.’ It’s a famous Welsh food made with tea, dried fruits, and a mixture of spices. Baked in an oven, you’ll see it served sliced up and buttered with that heavenly Welsh butter of course. 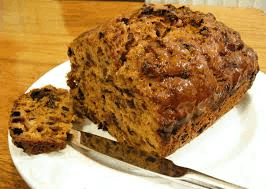 Remember, Wales is a country that is big on farming. The dairy that comes from here is undeniably decadent and an experience in and of itself. Welsh butter fully complements Bara Brith. While there are now bake-off contests with this famous Welsh food, you’ll find the traditional variety and new innovations with chocolate serves all around Wales. Just like Welsh Cakes though, be sure to taste it as the original form first before exploring the other divine flavour creations you’re sure to find.

Because of the farming practices in Wales, Welsh Lamb is some of the most prized lamb anywhere in the world. The lamb thrives amid the lush pastures and grassy mountain ranges. Their pure diet and pristine environment contribute to the rich, succulent flavours of the meat. 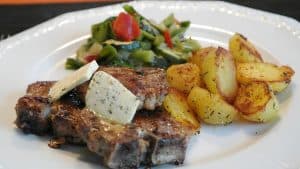 You’ll find Welsh Lamb is plentiful in the butcher shops of Wales though in many of the restaurants, you can’t go wrong when you order a dish of Welsh Lamb. From lamb chops to lamb risotto, there is much to explore with this divine meat.

Of course, we know that not everyone is keen on eating meat. Whether you prefer vegetarian dishes or you’d simply desire a break from heavy meaty dishes, Glamorgan Sausage is for you. This is a traditional famous Welsh food where the sausage is vegetarian. The main ingredient is Caerphilly cheese (one of the most famed of Welsh cheese, discussed below) along with leeks and breadcrumbs.

This heavenly combination is then fried until it’s nice and golden. It became a famous Welsh food after WWII when the scarcity of meat took hold and people were forced to be more creative with ingredients.

Glamorgan cheese was what was used in this recipe until the Glamorgan cattle almost became extinct. At that point, Caerphilly cheese was then used. In modern recipes, you may see onions instead of Welsh leeks and the addition of mustard. Even though much of Welsh cuisine does centre around meat, this is one vegetarian-friendly dish that everyone loves.

Wales is known for wonderful cheeses, and while we do recommend you try as many as you can, one you should make sure not to miss is Caerphilly Cheese. It’s said that it was made for the old coal miners to keep them full and sustained while down in the mines. It’s a mild cheese that’s a bit salty with a nice buttermilk aftertaste. 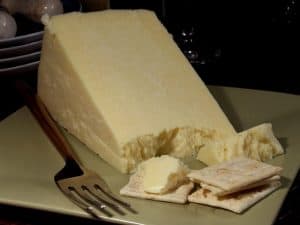 Originally created in the town of Caerphilly, if you happen to go during the annual festival for the cheese, you’ll be in for a treat. If not though, you’ll still find the cheese roundabout any time of year. Cheese is big in this old town, and if you love cheese, it’s absolutely worth a stop on your itinerary to visit Caerphilly cheese’s birthplace.

Interestingly, the Welsh Leek is in the national Emblem for Wales. It’s said King Cadwaladr of Gwynedd made his soldiers use these leeks on their helmets to help identify them as part of his court.

Royal or not, this famous Welsh food was already firmly in Welsh cuisine hundreds of years ago. The leek, along with cabbage, was one of the few vegetables accessible to the Welsh during those times. This is why you’ll find leeks among the prominent ingredients in the dishes served in Wales. 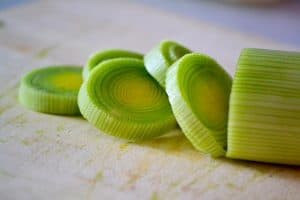 Nowadays, many other vegetables are available and widely used in Welsh cuisine, but leeks are part of the rich heritage here and will always be a part of the dishes too.

Famous Welsh foods are a wonderful way to explore the country of Wales. By tasting each one, you’re taking a bite of the history here and keeping it going for years to come.