Sosban Fach translated into English is the little saucepan. The strange little tune, musically similar to an old Welsh hymn, has arguably become the most popular of Welsh folk songs. It has been adopted by Welsh people as a song that is held dear to their hearts. Sung and memorised in schools, children grow up with the words and tune in their heads. Welsh choirs give passionate renditions of the song in concert halls and rugby fans sing it inspiring their sides to victory, also leaving saucepans dangling from rugby posts (read further to learn more).

Mary-Ann has hurt her finger,
And David the servant is not well.
The baby in the cradle is crying,
And the cat has scratched little Johnny.

Mary-Ann’s finger has got better,
And David the servant is in his grave;
The baby in the cradle has grown up,
And the cat is ‘asleep in peace’.

What is meaning of the Welsh folk song Sosban fach?

After reading the lyrics for the first time I can fully understand if you think what on earth does it mean? Well it’s based upon a fraught housewife with a mountain of problems to solve. The song was more than likely sang in pubs and working men’s clubs throughout the nineteenth century.

It is interesting how the song has evolved during more than a century of alterations and embellishments. The foundation of the song can be traced back to the bard Mynydogg (Richard Davies) in 1873, also famous for penning the lyrics to another Welsh standard Myfanwy.

It was later though, in 1895, that the catchy chorus and additional verses were added by Talog Williams. The music for the song was written by the Reverend D.M.Davies. The final embellishment was added in 1911 by an unknown contributor that added the bridge section about ‘Little Dai the soldier’. Though it has been proposed that through the ravages of time soldier has been mistakenly adopted instead of soldering which is more in keeping with the meaning of the song.

There are variations to the song which are sometimes sung, such as an alternative second verse that references Mary Jones and her tea-set, comically inebriated on an excessive amount of tea she has drunk.

Sosban fach has a strong association with the Welsh rugby club Llanelli RFC and the regional side, the Scarlets. With Llanelli’s Industrial history of tin plating, used in saucepans and other kitchen utensils, it is unsurprising that Sosban fach was adopted as a rugby club anthem. As a ritual supporters in some games could be seen precariously climbing the rugby posts and hanging saucepans from the top of the poles. In fact they’d sometimes adopt these tactics at away games too. 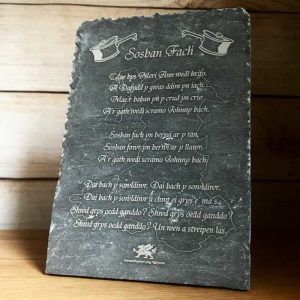 With it’s somber minor key melody a funny story has been told where Welsh supporters convinced a crowd of English commuters at Liverpool station to remove their hats in respect.

Following a famous victory when Llanelli beat the famous New Zealand All Blacks in 1972, a new chorus was devised and sung from the stands:

“This definitely falls into the category of songs that most Welsh people instinctively know.
It’s as familiar as chips and vinegar, though it is full of quite miscellaneous references like big and small saucepans, the scramming cat, the sick servant and Mary Ann’s fingers – a little bit of nonsense obviously does us good.
Arranging it here for banjo, melodica and guitar made me realise what a strong song it is both melodically speaking and energy-wise.”

Bryn Terfel, the operatic baritone, sings a version of the song on his album called ‘We’ll keep a welcome’ accompanied by the Orchestra of the Welsh National Opera.

Max Boyce sang Sosban fach on his live album We All Had Doctors’ Papers in 1975. The album went onto top the UK Album charts and is the only comedy album to reach number one.

Sosban fach by Only Boys Aloud

Only Boys Aloud sing a rousing rendition of the song. The youth choir came to popular public attention when they came third in the talent contest show Britain’s Got Talent in 2012.

Sosban fach is brought fully up to date in this rendition by Alistair James on the Clwb Cymru compilation album. A popular synthesised dance version with over 350,000 views on YouTube.

The book Howl’s Moving Castle written by Dianna Wyn Jones, has recently been made popular by through the adaptation release of a Japanese animated film. The book is partially set in Wales. It has become taken for granted that the song in the film, Calcifer’s saucepan song, is based on Sosban fach.

The A-Z of curious Wales: Strange stories of Mysteries, Crimes and Eccentrics

We’ve also written a blog on Calon Lan translation and facts for you to check out.