During ancient times, the Celts (for more information on who the Welsh Celts were we have covered this in another blog) had special symbols they used to represent their culture and identity. These symbols were revered from those days forward and are still prevalent in Wales today. They also make for great gifts in the form of Welsh jewellery and love spoons to remind you of your travels to Wales, or to bring back as a souvenir to friends and loved ones.

Triskelion is one of the most popular Celtic symbols featuring three conjoined spirals. It’s sometimes called ‘the triple spiral.’

For the Celts, it served to represent three deities worshipped at once and the movement of life from past to present to future. It often appears as though it is moving which stands for progress and improvement, a great symbol to have indeed.

Meaning ‘three-cornered,’ Triquetra stands for the unity of spirit when enclosed with a circle. The circle is seen as the protection for the spirit.

It symbolizes eternity and equality as well as the mind, body, and soul, and the past, present, and future, a very deep and meaningful Welsh Celtic symbol. 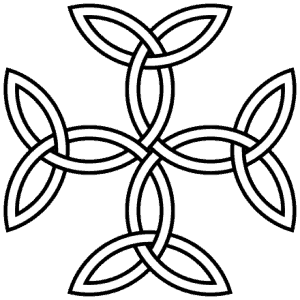 This Welsh Celtic symbol is composed of 4 triquetras. It was created to bring about unity and balance, along with the eternity of God, in one symbol.

With roots stretching below and branches stretching up to the heavens, this Welsh Celtic symbol the Tree of Life, encompasses life on earth. It stands for the unbreakable bonds each of us has along with the natural world in a network that is linked completely together.

Sometimes called Awen and other times Arwen, this symbol of three rays is traced back to the 18 th century Welsh poet, Iolo Morganwg .

Representing male and female energy via the 2 rays on the sides and the centre ray for balance between them, it’s much like a yin and yang symbol with Celtic origins. The 3 rays represent the mind, body, and spirit along with the sky, earth, and sea together as one.

The Celtic cross is one of the most significant to the Welsh culture and religious importance. Many theories abound for this symbol, though no one can confirm which is the right one. The most commonly believed one is that Saint Patrick made this symbol to convert the Druids.

Since the sun was of importance to these pagans, Saint Patrick combined the Christian cross along with the Celtic circle for eternity. Some even say that the Celtic cross predates Christianity.

One of the other popular theories is that this Welsh Celtic symbol came from the Sun Cross. It was believed that Taranis, the god of thunder who held a wheel in one hand a thunderbolt in his other, was the inspiration for this symbol. That wheel was used on Celtic coins back in the Bronze Age. Regardless of origin though, it may just be best to enjoy the Celtic cross as a symbol for faith which is what it is commonly used for today.

The bull was a very common symbol used in ancient Celtic times. It represented Esus, a
god revered in Celtic paganism. They would sacrifice nulls in rituals. It was meant to
represent strong will, wealth, abundance, fertility, and virility.

Much like the Awen/Arwen symbol, this Welsh Celtic symbol is often tied to balancing the universe. The circle in the middle is the universe while the four items around it symbolise the elements of earth, air, fire, and water. 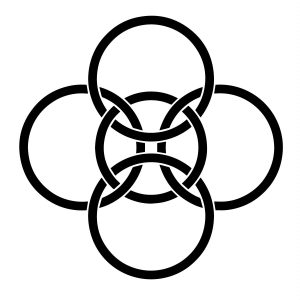 The Spiral in Welsh Celtic symbols is believed to represent the sun’s energy. 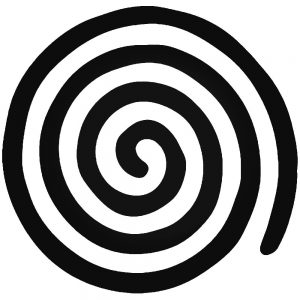 Since it has been found on many carvings throughout Europe where the Celts travelled though, it may be meant to represent perpetual movement and migration.

Sometimes the Welsh Celtic symbol of the Green Man is called ‘Man in the Tree.’ This symbol of rebirth is for the flourishing of the land that comes in the spring and summer months, something the ancient Celts prized for prosperous times.

Symbolizing the spiritual path, friendship, and endless love all interwoven together, the symmetrical Eternity Knot has no visible beginning or end. In fact, that’s where the famed saying of “tying the knot” comes from when talking about getting married. Traditionally in Celtic customs, a couple would have their hands bound together with an
eternity knot to symbolize their bond of unity forever. 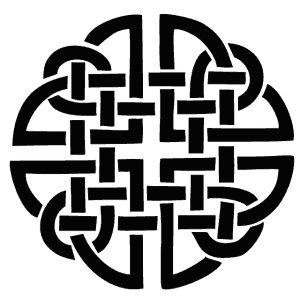 Trees were highly regarded to the Celts and oak was perhaps the most prized of all. The longevity of the oak tree is found in the Welsh Celtic symbol of the Dara Knot. This knot is used to represent both the branches and roots of this strong tree.

For protection, the Celtic Shield Knot was always placed near anyone that was sick or on the shields of warriors to fight off dangers and evil spirits. What makes it unique is the four distinct corners. It appears as a square within a circle and represents the protective power of the gods.

In ancient times, the harp was quite a popular musical instrument. Believed to have been brought over by the Phoenicians as an international trading good, the harp has been an important emblem that represents Welsh Celtic symbols since the 10th century. They were initially an instrument that was played for the aristocracy. Iolo Gosh in the 14th century wrote in a poem about harps that he saw Welsh harps as being made of wood with horse hair strings. The harp is believed to revel the immortality of one’s soul, not to mention that the beautiful music the instrument itself plays is still incredibly appreciated to this day. Modern day harpists such as Catrin Finch champion the instrument by playing in venues across the world.

These Welsh Celtic symbols shed light on the culture and traditions of Wales, not to mention, they make for stunning accents and jewellery to adorn yourself or your home. The protective powers that they represent surely can’t hurt!

The book of Celtic knots