The rich and varied history of Wales has left a long list of national symbols in its wake, with each representing the country’s values and ideals during the different periods of their arrival. As far as national symbols go, Wales has managed to acquire an eclectic collection over the centuries.

The national symbols of Wales have ranged from mighty creatures of legend, such as the red dragon, to slightly more mundane vegetables such as the leek. But what is the current national symbol of Wales, and how did it come to be recognized as such?

Why is the Leek the National Symbol of Wales?

The leek is the main ingredient of Wales’s national dish, has its likeness stamped on the Welsh pound coin, and its symbol features prominently on flags, banners, and jerseys at Rugby matches. With so much national pride in the leek, it’s understandable to want to know the history of how a humble vegetable could play such a prominent role in a country’s history.

There are several stories related to how the leek came to find its way into becoming a Welsh national symbol. The first is a tale of war and refers to the battle between Wales and the Saxons. On the eve before the Saxons and the Welsh were to clash on the battlefield, Wales’s patron Saint, David, advised the soldiers wear a leek. According to the legend, the leak was used to tell friend from foe during the frenzied chaos of battle.

Coincidentally, the battle is said to have taken place in a leek field, which may have had something to do with St David’s ruling. Cadwaladr, the 7th-century king of Gwynedd, has also been given credit for ordering his men into battle wearing leeks, so the soldiers could more easily identify each other when they were in the thick of it.

The idea of the leek as part of a soldier’s uniform was carried down through the centuries with Welsh longbow archers affixing a leek to their caps during the Hundred Years War of the 13th and 14th centuries. The archers were also easily recognized from the green and white uniforms they wore in battle.
During the reign of the Tudors, a time when a Welsh family sat on the throne of England, members of the household guard would wear a leek in their caps, an act which saw them rewarded with a small bonus in their pay. 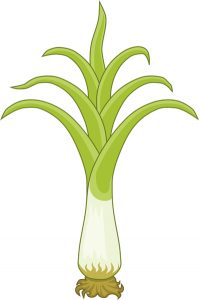 William Shakespeare may have also played a part in cementing the role of the leek as a national symbol. When Shakespeare’s play Henry V was published, it featured a scene proclaiming the wearing of a leek as an ancient Welsh tradition. The character, Fluellen, tells the king that he is wearing a leek. The king, who was born in Monmouth, Wales, replies, “for I am Welsh, you know, good countryman.” Fluellen also has a scene where he discussed a battle when Welsh soldiers fought “in a garden where leeks did grow.”

Another famous historical theory about how the leek became the national symbol of Wales was that leeks were used as rations for Welsh soldiers. It’s a tale that isn’t all that unbelievable, considering the leek is a staple ingredient in cawl, Wales’s national soup dish.

The leek has been with humanity throughout most of history, and has been used not just for food, but also had medicinal value. Even today, the stylized image of the leek is a symbol of pride, as it’s worn by every member of the Welsh regiment when commemorating St David’s Day.

Now that we understand how deserving of its status as a national symbol of Wales the leak is, we should take some time to explore a few other interesting badges of honour Wales has adopted over the centuries.

The references to how the leek became a Wales national symbol are obscure, but it doesn’t have anything on the daffodil, which may be even more obscure and steeped in legend. So, why is the daffodil a symbol of Wales? 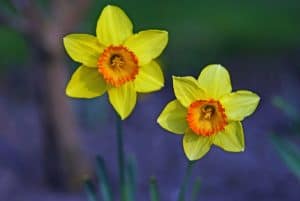 The story which makes sense to most people is that the word for daffodil and leek are very similar in Welsh – Cenhinen for leek and Cenhinen Pedr for daffodil. It may be that confusion between the two names led to the daffodil being adopted as a national symbol of Wales as well.

Many people are also of the opinion that the English government rallies behind the daffodil as a preferred symbol because it lacks the nationalistic undercurrents associated with the leek.

The Red Dragon of Wales, standing on a green and white background with one foot raised, has a proud tradition as a national symbol of Wales. The current iteration of the flag was officially adopted in 1959, and the design has ties to an old royal badge which has been in use since the days of the Tudors.

Why is the dragon the symbol of Wales and how did it become the national flag? It’s a story that goes back centuries. The long history of The Red Dragon means that the flag may earn it the record of being the oldest national flag still in use today. 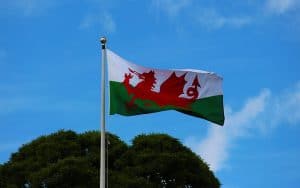 However, Arthurian tales are not the only ancient references we have to the red dragon. There is a legend which recounts Romano-British soldiers carrying the red dragon banner to Rome. The oldest historical record of using the dragon as a national symbol of Wales, however, is found in the Historia Brittonum, which was penned by the historian Nennius, sometime around 820.

The green and white background used on the new flag is a nod to the colours of the House of Tudor, a 15th-century royal family hailing from Wales. 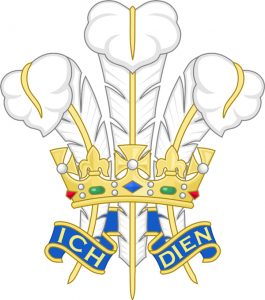 The Prince of Wales symbol consists of three ostrich plumes threaded through a gold coronet. The coronet is inscribed with the German words Ich Dien, which translates to “I Serve.” It’s an emblem that represents the Heir Apparent to the British and Commonwealth crown, and you will often see the symbol worn on the Welsh rugby shirts.

The symbol dates back to Edward, the Black Prince, who is credited as the first to use the design. On 12 May 1343, Edward III created the position of duke Prince of Wales, and the prince was invested with a circlet, a gold ring, and a silver rod. However, the details about how the symbol came to be in its current form are few and far between. Edward’s coat of arms as Prince of Wales was a “label of three points argent,” which it is said, he later changed into a badge of three ostrich feathers.

The Flag of St David

The flag of St. David is depicted as a yellow cross on a black background, using the same dimensions as St. George’s Cross. The flag of St. David did not become part of public consciousness of the Welsh until 1994 and is used primarily to display dissatisfaction with the current flag. It has since become a famous symbol of Welsh patriotism alongside the Red Dragon, rather than in direct competition with it. 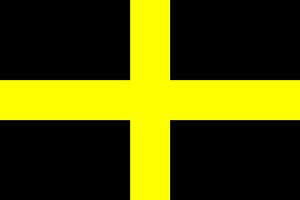 How the flag first came to be in use is somewhat of a mystery, but it is thought to have been designed to fly above Anglican churches in Wales. Whatever the flag’s origin, the colours of black and yellow have long been associated with Saint David, the Welsh Saint.

Four lions, alternating as red lions on a yellow background, and yellow lions on a red background, is the symbol of Owain Glyndwr. The flag has enjoyed a surge in popularity in recent years and is used by the National Eisteddfod for Wales and is also popular with pro-independence groups. 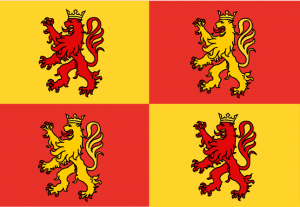 Owain Glyndŵr was a Welsh leader who yearned for independence from English rule in the late middle ages. He led a long-running yet unsuccessful war of independence, but his name lives on alongside legends such as Arthur and Cynan. The origin of the design is thought to be inspired by the counter-charged arms of the Houses of Mathrafal and Dinefwr.

The Red Kite is a source of great pride for the Welsh people. Under a century ago, there were only two breeding pairs in the country.

Now, when the Welsh look up, they may see hundreds of the magnificent birds soaring over rural areas around Wales. Red kite feeding stations provide opportunities for locals and visitors to view this magnificent bird up close.
The red kite is well-loved by the people, and they showed their adoration in 2007 by voting the red kite as the most popular bird in Wales, which also led to it being adopted as the national symbol of Wales for wildlife.