In around 1000BC, the Iron age saw the people gather and seek protection in large hill forts across Wales. A superb example of an Iron age Hill fort can be found on the Lleyn Peninsula at Tre’r Ceiri. Copper mines (e.g. the Great Orme mines in Llandudno) and living farms were abundant. These Celtic settlers formed a large population whose culture and social structures spread throughout most of Europe.

Around 600BC more Celts settled in Wales introducing iron instead of bronze made tools and weapons, an art style called La Tene, coins and the language. It has been claimed that there were two separate migrations: one from northern europe apparently explaining the genetically taller population in North Wales, and the second from the Iberian coast illustrated by the stockier, darker complexioned and more passionate populace of South Wales. Four differing tribes settled in Wales: Demetae and Silures in the south and Deceangli and Ordovices in the north. Each tribe with their own Royal Family, priests and rituals. 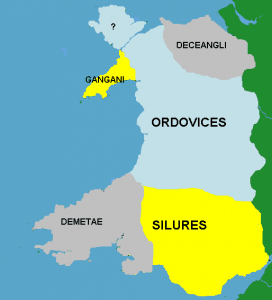 In 389BC Celtic tribes captured Rome. However, due to a lack of organisation and unity amongst the differing Celtic factions, the Romans ultimately ceased control and pushed the Celts back to the far reaches of Europe, such as Galicia in Spain and Brittany. Latin based languages dominated as the old Celtic dialects were largely replaced. In the centuries leading up to the Roman invasion, the population in Wales has been estimated to be around 80,000.

In about AD 50 the Romans entered Wales and it took until AD 59 for their soldiers to reach the Menai Strait, where they viewed their foes on the banks of the island of Anglesey. Through the reports of the Roman historian Tactitus, he describes the scene as frightening as the Celtic warriors lined up like a ‘forest of weapons’, druids murmured strange incantations and black haired women with torches screeched at the tops of their voices, as they ran wildly along the banks of the Menai. Conquering their fear the Romans crossed the strait and slaughtered the inhabitants, wiping out the remnants of the oral tradition that was Welsh druidism.

The Silures in the south were known to have put up a particularly strong fight and so much so that the Roman generals wanted them to be wiped off the face of the earth. Eventually by AD78 the Celts resigned to Roman rule, despite years of brave resistance under such leadership as that of the great Celt Caradog, who was sent all the way to Rome to be sentenced. Caradog’s plea was recorded by Tacitus. Due to the brave resistance of the Welsh Celts, the Romans realised they needed to maintain control, and so built massive fortresses, such as the one located at Caerleon called Isca where they housed an entire legion. Gradually the Celts began to enjoy some of the comforts, advancements and benefits that were introduced to them by the Romans. 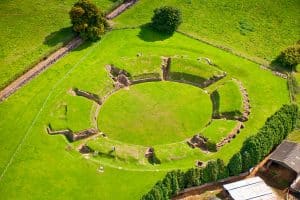 By AD390 the Romans had gone, leaving behind better roads, the use of writing, new languages and the foundation for Christianity. The native Brits took back their lands and with it the need to protect it. It was then the turn of Irish pirates to attempt a number of attacks but they were forced back. The Anglo-Saxons then tried their luck. In AD577 following the battle of Dyrham in Gloucester, the Celts in Wales were cut off from their counterparts in the West country. And in 616 they were cut off from Cumbrian Celts following the battle of Chester. Wales is then formed as the Celts are pushed back to the hills and mountains in the West. The newly formed territory is run by Princes and Kings that fend off the Vikings and the Mercians up until 1070 when the Normans invade.