As Welsh castles are such an important feature on the Welsh landscape, we at Welsh gifts with heart have compiled a list of ten Welsh castles facts that we believe are both interesting and enlightening.

1. Most Welsh castles aren’t actually Welsh. They were built by the English to subjugate the Welsh e.g. Caernarfon, Conwy and Harlech were built under the instruction of Edward I.

2. Caerphilly Castle is the second biggest castle in the UK and the third biggest in Europe. But that is not the second extraordinary fact, as rather, one of the towers at Caerphilly leans at angle of an incredible 10 degrees, and’s that’s more than the Learning Tower of Pisa. Pretty cool huh?

3. Did you know the person responsible for overhauling Cardiff Castle, with it’s lavish and decorative interiors in the 1860s was reputed to be the richest man in the world? The Bute family made their fortune by establishing Cardiff as the one of the world’s foremost exporters of coal. With access to such considerable wealth, the 3rd Marquis of Bute appointed the renowned architect William Burgess for such a grand task. 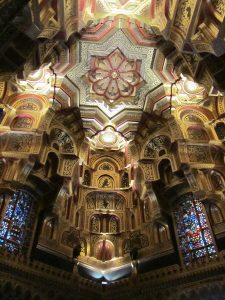 The result has been described as one of the finest examples of Gothic revival in all of Europe by numerous commentators. Certainly worth a visit if you have a free Sunday afternoon.

4. Flint Castle built under the instruction of Edward I, has been a prominent setting for some of Britain’s most acclaimed artists. JMW Turner, probably Britain’s premier painter did a watercolour of the castle in 1838. It was also key setting to Shakespeare’s Act III in his play Richard II. At a pivotal point in the plot, Richard II surrenders and goes to London with Henry Bolingbroke, later Henry IV.

5. Half way through our Welsh castles facts. If you want castles then Wales really is the place to visit. The Welsh tourist board claims Wales has more castles per square mile than anywhere else in Europe. There are over 600 of them so you’ll be spoilt for choice. Though admittedly about 500 of them have virtually disappeared into hilltops leaving nothing more than mounds, ditches etc. Nevertheless that leaves about a hundred to explore that aren’t located too far away from each other.

6. You remember the King that went around chopping off the heads of his numerous wives that you were told about at school. You know that song that you were taught so you would remember in exams. Well his dad Henry Tudor was born at Pembroke Castle.

7. Welsh castles fact number seven. Beaumaris Castle in Anglesey is famous for the simple fact that it was never finished. Perhaps the greatest Castle in Wales never built. Due to a shortage of funds and the distraction of trouble brewing in Scotland, the last and perhaps what would of been the most impressive of Edward I’s castles was never completed.

9. The great cultural song ‘Men of Harlech’ was inspired by a siege during the War of the Roses. Dafydd ap Ieuen ap Einion held out at Harlech Castle on the side of the Lancastrians for a staggering eight years; the longest known siege in the history of the British Isles. Eventually, Dafydd surrendered at the point of starvation . It was the last Castle to give away to the Yorkists. They left the Castle playing music and flying flags. One of the survivors was the Lancastrian Henry Tudor, later to be Crowned Henry VII.

10. The final and tenth of our Welsh castles facts revolves around Dolforwyn Castle in Powys. This was built in the late thirteenth century by Llywelyn ap Gruffudd, the Welsh prince of Gwynedd. Jan Morris in his book on Welsh history calls this the saddest of all the Welsh castles and perhaps all Welsh buildings too.

“…the last of the castles the Welsh princes of Wales ever built, upon the soil of their own country. A steep and squelchy track, more mud than grass, winds its way to this fateful bastion.”

Epic views of a small country by Jan Morris